What is a Mid-Century Modern House?

If you've ever visited your grandma's 1950's ranch home or watched the show Mad Men, you've probably seen a mid-century modern house. Though they are reminiscent of a style that had its heyday during the first half of the 1900's, mid-century modern homes remain popular today.

If you've ever visited your grandma's 1950's ranch home or watched the show Mad Men, you've probably seen a mid-century modern house. Though they are reminiscent of a style that had its heyday during the first half of the 1900's, mid-century modern homes remain popular today.

Many younger buyers are bored of the box-like, cookie cutter houses in the suburbs and are drawn to the uniqueness of mid-century modern architecture. People aren’t just buying the old, original versions, either. Many residential builders and architects stay busy by designing brand-new mid-century modern houses for people who absolutely love this look.

Many mid-century properties possess several of these charming characteristics:

"Mid-century modern" as a period is actually difficult to pinpoint exactly. Generally, it is thought to describe architecture, furniture, and decor from the middle of the 20th century (roughly 1935 - 1965).

When compared to the 2010-2020 era, mid-century modern design tends to be hip, retro, simple and often edgy or industrial.

The popularity of midcentury modern design has emerged from Baby Boomers and Gen-X'ers that were raised in MCM homes.  Despite clothing and music from the midcentury period having gone out of style by the 1980's, interest in the period began to return near the turn of the millennium. In the last 10 years, MCM fans have grown from a small, niche group of enthusiast to more of a mainstream following.

Here are the most common reasons why Mid-century modern homes are so popular and will be around for another century.

One reason for the popularity of these homes is that Millennials love vintage design and style. This category has proven to be a great combination of chic and functional.

So, it’s not surprising that when Millennials decide to buy houses, many of them love the idea of owning a home that has an authentically vintage feel to it. At the same time, mid-century modern houses still give them plenty of room for creative design choices.

2. Unique Spaces With A Lot of Character

Another great thing about mid-century modern homes are a throwback to the 50's. Instead of an open concept, you will often see defined rooms and spaces for dining, studying, cooking and lounging.

Mid-century modern decor leaves a lot of room for interpretation. No, you don’t have to buy authentic furniture from the era. You don’t even need to buy furniture that takes its style from that era. Contemporary touches are a great way to provide a bit of contrast and ensure your living room doesn’t look too much like the set of Mad Men.

Many MCM homes can be found in mid sized and major cities throughout the US. The best way to search for MCM homes is to filter by year built and shop for properties that were built between 1940 - 1960. 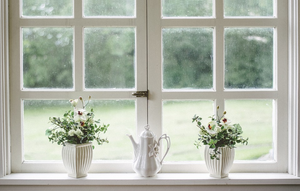 How to Take Care of Your Windows: Tips From the Pros

How to Clean Out Your House Prior to its Sale